One of the most asked questions that we get is what should I use to worm my pig(s) and when should I do it. Also, why do I want to use a wormer when they have mange mites?

Most wormer's will also kill the mites that cause mange. The most popular and easiest to use is a liquid called Ivomec 1% Solution for Cattle & Swine.

A number of the sanctuaries have switched to Dectomax as it claims to provide protection for 21 days while the Ivomec protects for 14 days. Dectomax, like Ivomec, comes as injectable which can be given orally, and as pour-on which is put along the pigs back like the Frontline dog and cat products.

"I have used Dectomax with no problems, but I can't say it was any better than the Ivomec and it is more expensive." Ted of Willow Ridge Sanctuary

Another question is: What if my pig has never been wormed? No one has ever mentioned that I need to do this.

This does not fall under the rule of "If it's not broke don't fix it." It does not hurt them to be wormed. Most of us don't talk about the worms enough because the Ivomec and Dectomax that we use mainly for prevention and treatment of mange also kills worms and lice.

If they are on the twice a year schedule (spring & fall) then worms are not a problem because we are taking care of it when we Ivomec them.

If your pig doesn't have worms he will just pass the excess Ivomec out of his system. If he does have them you will certainly know as those are some of the nastiest things we have ever seen come out of a pig!

"Some of the rescue pigs that have come in have passed these terrible looking things after their arrival and their first treatment with the worming, but I believe that the twice a year schedule keeps them pretty clear after that." Phyllis of PigPals Sanctuary

The only worms you will see after worming is the large roundworms which can be up to ten inches long and thick as a pencil, although they are usually much smaller.

They will be lying on a pile of poop. They will pass from one to three days after medication depending on the regularity of your pig. Meds can be given before, during or after a meal it doesn't really matter.

We do not recommend worming the young ones that have worms. It is best to feed them better and worm them when they are 15-20 pounds or more.

Pig worms are species specific so don't worry about the other animals. A word of caution here; A worming schedule of twice a year is adequate for most pet pigs and the products talked about here are for pigs ONLY! You will need to check with you vet as to what is best for the dogs and any other animals that you may have.

On very young pigs you can dust them with Seven Seven powder like you use on your garden (you can get this at your local garden supply), or in the case of bad mange you can use this to kill the mites on the outside and relieve the itching until the Ivomec can work. Make sure you do not get the powder in their eyes or mouth!

This is meant to help with the itching, but you will still need to worm them with Ivomec to kill the mites that are in the larva stage.

If you don't have any Seven Seven dust at home try the feed store for some hog dust. The dust will help give relief on the itching while the Ivomec is working to kill the mites from the inside.

Everyone has their own way of giving Ivomec. If you go to the vets he will want to give a shot. Pigs don't handle shots very well so ask if it can be given orally. We give 1cc per 50 pounds of body weight. Ivomec is one of the safest drugs out there and has a wide margin for safety.

Or you can dampen his food just a little and squirt the Ivomec on the food and stir and they will usually eat it. If you have more than one pig keep them separated so that you makes sure each pig gets his full dose.

"Yes, I put it in my pig's food when I give it. Make sure you are giving enough as these pigs grow fast and it doesn't take a little more when you do it by mouth. I cut the food in half, dampen it a little with juice, then squirt the Ivomec on the damp food and stir it up. By cutting it in half you are making sure that they clean it all up and are getting the medicine.

Then mark it on your calendar and 14 days later do it again. (This is for the pigs that have mange.) We do this on the outside pigs every spring and fall and it keeps thing pretty much under control until some new kid moves in that has it." Phyllis of PigPals Sanctuary

If you use Ivomec it will work for those mites in the ears as well as anywhere else. (Ivomec is not picky about what part of the body it works on as it goes into the blood stream and goes all over the body.)

Also, for chronic mange you can give every 5 to 7 days for up to 4 weeks. It is hard to overdose on Ivomec. For a "normal" case of mange you give two doses about 10-14 days apart and that is it. From then on you will want to worm your piggy twice a year (spring & fall) as a precautionary measure.

It usually takes that second dose to get the larva stage of the mites that haven't hatched yet. BUT, make sure you do it twice 14 days apart!

It is a good idea to change bedding when you are done with the 2nd dose even though the medication will kill any new mites picked up.

Can a human get mange? If so, what would it be like? Mange on a human is usually an itchy red rash...REALLY ITCHY!! You shouldn't have to worry too much about that as most cases on humans happen when the pig is really loaded with it and people take them to bed with them. The mites don't like us as well as the pigs so it's usually a light case and will go away on it's own with simple nothing.

They really don't like us too well and will leave on their own. Washing with alcohol might help with the itching.

A variety of products can be used to treat your pigs. Listed below are few:

Ivermectin - Used to control worms, lice and mites. Can be administered in many forms.

Ivermectin Injection for Swine - This is a 1% injectable solution. It can also be given orally although this is an off-label use. A syringe and needle is needed to extract the solution form the bottle. The smallest bottle is 50 ml. so it is not cost effective in worming just one or two pigs.

Ivermectin Paste Wormer 1.87% - This product is designed for horses or equine but can be given to pigs at the same dose. It is relatively easy to administer on a piece of apple or the pigs favorite food.

Ivermectin Granules - A feed additive that is mixed in with the food over a six day period. It can also be used to top dress feed to treat a specific problem. Sold in 50lb bags.

Ivermectin Pour-on - A .5 % solution which is administered along the backline similar to flea treatments used in dogs and cats. The smallest container sold is 250ml which will treat 25 to thirty pigs.

Dectomax - A drug similar to Ivermectin, but claims to have a longer residual life. Also controls lice and mites and can be administered several forms.

Dectomax Injection for Swine - An injectable solution that can also be given orally.

Dectomax pour-on - A solution administered along the backline as the Ivermectin pour-on.

In addition to a regular worming schedule, effective pasture or backyard management can help to reduce the parasite load on your property. This would include removing manure on a regular basis. If manure cannot be picked-up, periodic raking or dragging the pasture will break-up the manure exposing it to sunlight which will help to kill the eggs.

Don't forget to check with your vet and local feed store.
Posted by Dottie's Den at 2:21 PM

Email ThisBlogThis!Share to TwitterShare to FacebookShare to Pinterest
Labels: how to worm my pig, oral wormer for pigs, pig wormer ivermectin, worms in my mini pig

New comments are not allowed.

Dottie's Den
As a believer that pot bellied pigs make perfect pets, I founded Pigs4Ever.com to be the ultimate online resource and gift shop for pet owners of these beautiful animals. 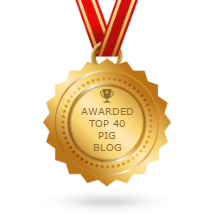